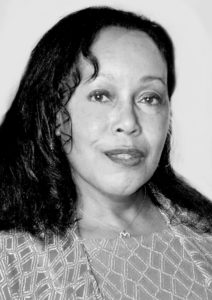 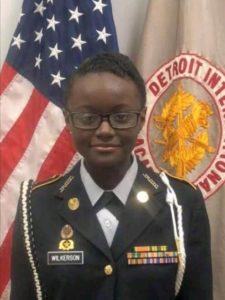 By Kim J. Clark
Aka Expanding Love
Throughout 2019 The “DeMarco Projects Speaks” will showcase phenomenal young people who
this writer has had the privilege of meeting through the JROTC. Many people are of the mistaken
understanding that kids that joined the JROTC are being recruited for the military. My
experience has been, the students are learning and developing leaderships skills. While it is true
that some will choose the military, most will not. Whatever the case, I feel it is important that as
a community, we must be aware of the fact that there is an opportunity for public school students
to be groomed to become visionaries and given tools and guidance on how to achieve their
highest and grandest vision of themselves.
The student we are showcasing this month is Cadet Lieutenant Colonel LaShaun Wilkerson,
Battalion Commander for the JROTC program at the Detroit International Academy for Young
Women (DIA). LaShaun exudes quite strength. When she walked into the room where we were
assembling for a college tour it was obvious that she was a leader. Cadet Wilkerson spoke very
few words, but when she did, those around her stopped, paid attention and gave her the utmost
respect.
During the interview, LaShaun expressed that prior to attending the DIA and joining the JROTC,
she spent most of her academic years being bullied. She knew it was in her become a leader. She
stated that throughout her life her parents instilled leadership qualities in her, but it was hard for
her to express those qualities because of the bullying and difficulties she was experiencing at
school. She felt belittled and hid what she truly felt she was capable of. However, when her
family made the decision to enroll her in the DIA the course of her life changed directions. The
leadership qualities began to emerge in 9th grade when she joined the JROTC where she was able
to express herself and grow into a confident leader.
Cadet Wilkerson’s parents work in a concerted effort to help her achieve her goals. Her mom,
Ms. Cheryl Bryant expressed that she makes sure that LaShaun knows that the lines of
communication are always open. Ms. Bryant acknowledged that when LaShaun is troubled, she
gives her room to work through the issue, but is always ready to lend support or guidance. Her
father, Mr. LaDarrin Wilkerson is always available to do whatever is necessary to help his
daughter succeed in life. Her parents demonstrate by their actions that they understand, it is their
responsibility to ensure LaShaun has whatever she needs to accomplish her goals.
When asked what she wanted people to know about her, she replied, “I want people to know that
I am confident.” She went on to say people confuse her silence with shyness. However, she sees
herself as a quite observer. She grew up around adults and was taught to observe her
surroundings. This 16-year-old, 11th grade student does appear to be shy, some people think she’s
scared. However, she is anything but shy or scared. It takes great discipline to be a quiet observer
and as a result of having this skill she stands out from other cadets as a strong confident leader.
When asked what words of wisdom she would like to pass on to young people who may be
dealing with bullying or low self-esteem, LaShaun recommends that students, “Do not let what
may have happened in the past or what may be happening in the present affect you. Always think
positive.” Cadet Wilkerson highly recommends participating in the JROTC because students are
taught to create positives outcomes no matter what is presently in front of them. One of the
greatest skills LaShaun has learned is to not complain and adapt to her environment.
LaShaun is planning to pursue a degree in nursing at the University of Michigan. She is also
interested in computer science. When asked what she plans to do in 5 years, she indicated she
sees herself in uniform at either West Point Academy or in the Army. Cadet Wilkerson would
like a have a family while maintaining a military career. This writer has no doubt that LaShaun
will continue to lead with confidence and be a role model of youth.
Kim is the mother of a veteran who loved his country and was willing to lay his life down for the
freedoms he believed in. She is the Founder and CEO of The DeMarco Project, Non-profit
organization. Her life’s mission it to save veteran lives and improve the quality of life for
traumatized military service persons. If you would like to support her in the work, donations are
welcome. Visit the website: www.TheDeMarcoProject.org.
The articles featured here are published in the Detroit Native Sun  http://www.detroitnativesunonline.com.
Hard-copies can be obtained at the following locations.